Happy Thanksgiving Everyone!!!! It’s the first without my Mother on the planet. I’m Thankful to have had her as my one and only incredible Mom. On this holiday, I’m Thankful for so many reasons; My Wife and Three Daughters Ali, Elizabeth and Bella, chief among them. So, why the dystopian image? 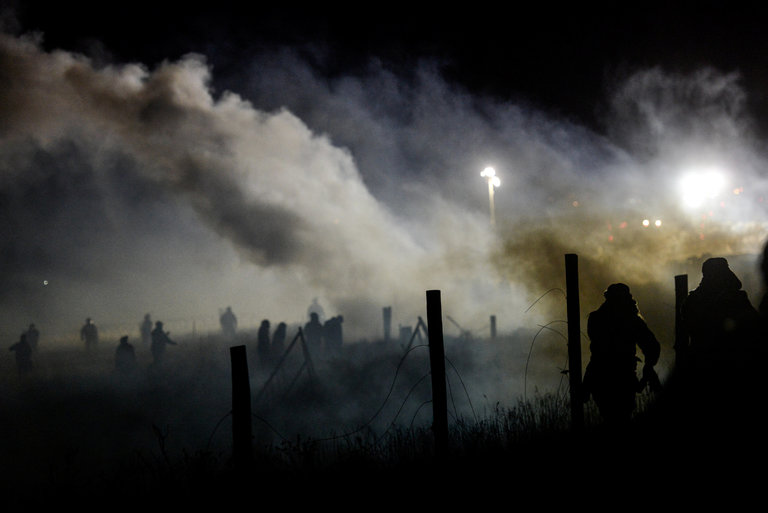 We teach our kids about Pilgrims and Natives and Autumn Harvest feasts. I’m not sure if you guys are aware of it, but there is something happening in North Dakota right now, not just awful but something truly unjust, commonly referred to as the Dakota Access Pipeline (DAPL).

Our extraordinary and proud country, these United States of America, has a brilliant but also deeply troubled past. To the good, we put a man on the moon, cured diseases and accomplished things no one else in the world ever had or could. On the other hand, for a long time we permitted the enslavement and commodification of human beings and all but eradicated an entire race. I’m Thankful that, in extremely important ways, we are making progress.

This next sentence will seem out of left field but go with me… In 2004 (or around that time) I received an Ethics Briefing from the Bush Administration in the ‘Indian Treaty Room’ at the White House. I was joining the President’s Council on Service and Civic Participation.

I was mesmerized by the name of that room. I learned that the War Department stored papers there during the 1930s, including treaties with the  American Indian nations

Have you studied much about the deals, the agreements, the legally binding treaties that our country has made with Native American Tribes? There are a lot of them and we have frequently, illegally broken them.

What is happening in North Dakota today? You may have seen on tv that rubber bullets, tear gas and fire hoses (20 degree nights) have been used on people protesting the laying and use of a pipeline on or near certain tribal lands, threatening their fresh water supply. The peaceful protests have grown quite large and the people are now using different forms of Civil Disobedience.

It’s not quite good enough that a Government like Flint, Michigan continues to poison its citizens’ water supply, but now our Federal Government is behaving in a similarly reckless and inhumane manner.

Throughout the History of America and specifically with the Civil Rights Movement, there are many details and facts animating the conflict.

The first time I really heard about this was during the Presidential Campaign in September, when a few different Native Americans approached me and asked if I’d heard about what was going on. I hadn’t, but I thanked them for bringing the issue to my attention, and assured them I’d properly inform myself.

I was relieved to hear a question posed to President Obama and to see that several of our federal agencies put a temporary halt on the project, citing the need for more study.

Predictably, the monied interests involved and the protesters have clashed and continue to clash. The situation is getting worse. It’s violent. Loss of life is imminent.

I’m taking the time to write about this because it’s Thanksgiving. We are about to sit down to a meal and the images and spirit of our shared history with the indigenous people of this land will be invoked.

I couldn’t in good conscience eat the food and wrap myself in the embrace of my loved ones, knowing that the Dakota Access Pipeline Protests are being senselessly put down by a militarized police force, without saying something.

If your first reaction to my last sentence is to push back on behalf of the police, know this: I love and revere the police. I honor the many sacrifices that our law enforcement officials make on a daily basis. I’m mindful of the brutal execution style attacks in the last few days. I approach every officer I’m near with a thank you and a statement of good wishes for them. I tell them that the vast majority of people in our country love and support them and to please never feel isolated, no matter what.

But, this police action in North Dakota is an absolute wrong.

There is much to do, organizations to donate to, public officials to write to or call, there is a march this Sunday in D.C. and so much more. The Hash Tag #NoDAPL is a pretty good place to start.

With a load lifted from my shoulders, I will retire to the Thanksgiving table. The Macy’s Parade, The National Dog Show, The Lions/Vikings game were all fabulous. I’m not sure if I’m doing “Black Friday” tonight, but I feel so much better that I’ve shared this with you.

I #Run3rd in Solidarity with the Native Americans Protesting in North Dakota tonight!!!