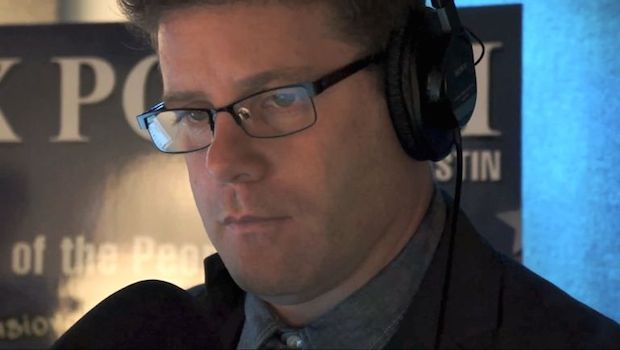 In this age of opinionated pundits and aggressive talkshow hosts, it has become increasingly difficult to find a place to discuss politics without fear of being attacked or made to seem foolish. At Vox Populi Radio, we seek not to change minds, but to learn more about one another. We believe that with curiosity and civility,  we can find a way past entrenched viewpoints, forward to understanding and real solutions.

It started over 20 years ago with a dream…

1973. TWA Airlines, First Class Cabin. Two year-old Sean Astin waddles up the aisle, shaking each passenger’s hand. “My name is Showuhn, pweez vote foh me!” That could not have been my own idea. Surely, my parents were amusing themselves with their brilliant puppet toddler. Only a few years later, I would run for 8th Grade Student Body President at St. Paul the Apostle School in Westwood, California.

I like to joke that those who can’t do, teach. And that those who can’t teach… they become talk show hosts. Twenty years ago, I wanted to create a show called “Civic Duty.” I couldn’t get anyone else interested in the idea and I’m not sure Al Gore had invented the Internet yet.

But one fateful appearance in 2012 changed it all. I was at Universal Studios at the Jon Lovitz Comedy Club Theatre. On the third floor, a small group of people had built a pretty reasonable approximation of an actual radio studio. It wasn’t quite Christian Slater in the basement, but it wasn’t Sirius either. The microphones were professional and the engineer was not a hack. The phone answering system was ghetto and what was nominally referred to as a graphics board was a first-run 1970s Star Trek TV Production vintage (or at least it felt like it). A steady stream of Comics/DJs filed in and out of the place with their turn-key shows. I had been in the side room (part Jetsons-Ikea and part storage) for maybe ten seconds when it occurred me that I could have a radio show here. I almost abandoned my original purpose for visiting as I searched for the right person. I basically looked at the segment producer and said, “Take Me To Your Leader.” Frank Kramer.

A month later I met with Frank in his garage, where his radio station had been operating prior to the Lovitz, I told him my idea. We shook hands, and that was that. I had a new hobby and he had a political radio host with absolutely no following squatting in his studio during an open time frame. One of his staff put together the banner, a DJ from one of the other shows built an intro music piece, they taught me the ropes and before I knew it, I was staring at a red light with a microphone in front of me. As for topics, guests and stuff to say, I flew by the seat of my pants. Who was listening? Yep, some small number of however-many of those 26.2-thousand Twitter followers thought tuning into an actor’s political show might deserve a look-see. The Voice of the People was alive.

Now, in the Spring of 2014, flush with the money and good will from nearly 1,000 Kickstarter Backers, my brother leads me on a cold rainy day, after my car was towed to a garage nearby, into the TradioV studio. I meet the owner Michael Zinna and the rest is soon to be history.

Soulmates in political talk radio, our journey and the much anticipated 2nd season begins!!!

Sean Astin served on the presidential campaigns of John Kerry in 2004 and Hillary Clinton in 2008, traveling extensively with Chelsea Clinton for the latter. He’s served on two non-partisan Presidential committees. In 1995, under President Bill Clinton, he became a Civilian Aide to the Secretary of the Army, serving for 10 years under six secretaries of the Army in two administrations. President George W. Bush appointed Sean to the Council on Service and Civic Participation whose mission was to promote a culture of volunteerism and civic engagement. Sean was campaign manager for a candidate in a special election for CA’s 36th congressional district in 2011.