First, I’m fine. We are all fine. Devastation and hysteria aren’t useful. Shock and dismay are disingenuous. Heartbreak and sadness are easier to understand. This was predictable and feared, if not predicted. For millennia, White Men have never willingly yielded power. Last night was no different. Women, Minorities and Millennials simply didn’t care ENOUGH, in sufficient numbers to show up. Tens of millions cared deeply, but fewer millions than in the past took the interest or the time to vote (5 million fewer than in 2012). 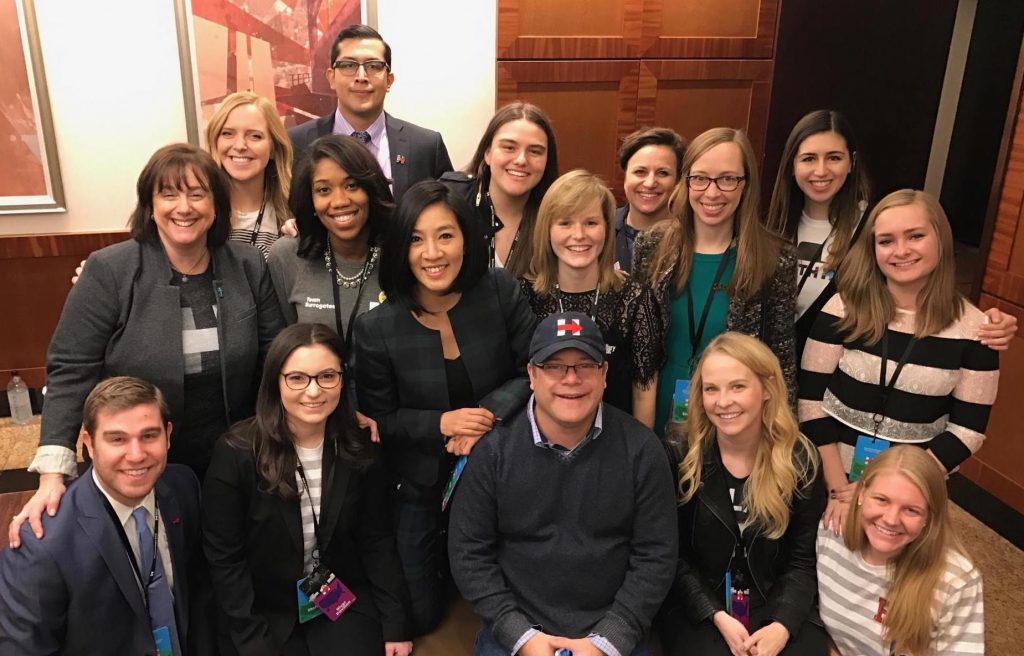 With my bosses, the Hillary Clinton Surrogate Team.

So, now we will watch a UNIFIED REPUBLICAN PARTY dismantle much of what President Obama and Democrats have fought to achieve through 5 and a half years of obstructionism.

But, here’s the thing. There is hope. There is always hope.

Hillary and Barack struck conciliatory notes this morning. As usual, they were graceful and showed true leadership.

I think it is important and will become vital to always keep in mind that more Americans voted for Hillary than voted for her opponent last night. She won the popular vote. There is important moral solace in that fact, when talking with our kids. I know Hillary will hold on to that truth.

That said, it is right and proper to acknowledge that President Elect Trump won a decisive Electoral College Victory and DESERVES to ascend to the highest office in the land. He has the right to control the nuclear codes. He has the standing to address the Nations of the World on behalf of ALL Americans. That’s how our our Country works. That’s how Democracy rolls.

Without malice or acrimony, I don’t congratulate my fellow Americans, because I think they made a dangerous and self defeating mistake. But, I don’t begrudge them either. Everyone in America had all of the information any voter could possibly hope to want in order to make informed decisions. So, I respect them. I respect the voters. I respect their voices. I respect their victory.

I’m sitting in my hotel room around the corner from Trump Tower and I can hear the fury of the marching protesters. I will not join them. They are a day late.

Of course, they have a right to assemble peacefully. The problem is that history show us, they will expend energy now, and be nowhere in sight when the time comes to take action again, within the context of our democratic process.

Supporting President Elect Trump and rooting for his success in leading our Nation is the appropriate if not forthright thing for Democrats to say. Among the reasons we say it is to mitigate against any feelings of violence that the abruptly disadvantaged might take. It’s also to project stability for our uniquely American concept of a Citizen Controlled Military to the world. So, for those reasons and my desire to always be constructive, I too communicate a fervent wish to see the people of this Nation and our Democratically elected leaders, work together in good faith in our common interest.

It is only a matter of time until President Elect Trump has a misstep, as all leaders do. He will make the kind of clumsy, ignorant and narrow minded mistakes that he is famous for. It is at that moment, those moments, that the Nation will require a genuine sense of reverence for our institutions and yes, to lift up “the man” in order to mute the damage. Surprise, confusion, anger or disbelief when this occurs, will not just be inappropriate, it promises to perpetuate the nonsensical emotional relationship that the public too often feels about issues in our society, fueled by a craven media and exalted by a derelict “reporting” class, when the smart thing to do is “fight” rather, peacefully and purposefully organize. The shape this should take?…Elections.

Millennials in particular bear a large part of the responsibility for anything and everything that occurs under President Elect Trumps Administration. The Bernie Sanders movement shows that “they” know how to organize. Well, the time to do so was yesterday, and in sufficient numbers, they did not. They abdicated the natural order of the moral authority that their youth confers. Based on the many Universities I visited and campaigned at, LAZINESS ruled too many hearts. It’s typical for a middle aged person to say that about a younger generation. Of course, millions of millennials were fierce and determined throughout the general election, despite their disappointment with the outcome of the Primary, but it is tragically true that more than enough millennials who could have delivered a Democratic mandate couldn’t be bothered. If their dissatisfaction with Hillary was greater than their feelings for the issues they care about, they can rest quietly tonight. If they are only now coming to terms with the magnitude of the consequences of this election, hopefully, they will take this as a learning moment and not find themselves on the sidelines in the future. Now, of course, millennials are no more accountable than the rest of the electorate, but squandering the promise of their idealism burns me deeply.

Therefore, the time for them and all of us to organize again is NOW. But, not AGAINST TRUMP… rather, FOR SOMETHING. Failure to recognize that what I’m hearing outside, what sort of sounds like (and looks like, it’s on tv in the room) reflexive outrage today will not change the outcome of the election or likely improve future electoral dynamics. What I am hearing and seeing feels like another wasted opportunity. Post Election Political Anger is fast food. Eat it now, suffer for it later. This moral anguish that is rising up through the skyscrapers outside my window will not change our Democracy. Should it turn ugly, violence will be put down. Screaming, absent a plan is not meaningless. Clearly, millions of people need to cry out in pain, but in terms of actually helping real people around the country and improving their lives, it is inconsequential.

At least, a crowd of 5,000 people makes a two day news story, but won’t last. Now, if the 57M people that voted for Hillary wanted to accompany me on a candle light march, I’d like that. If they wanted to march in support of an issue… I’d probably race down and join them. Attacking President Elect Trump’s legitimacy will only drive him into anger and retribution. If he sees millions marching FOR something, say climate…well, he’s a famous publicity seeker…he might just want to be a part of it.

A word for the 57M people who voted for President Elect Trump, if you held a candle light march for unity, I’d walk with you too.

But, I am a Democrat and I don’t want to mourn. Well, I do want to mourn the loss of this election, by my manner of grieving looks like a lot like marching into righteous battle. I reserve the right to PROTEST with absolute ferocity. I guess, people are just struggling to figure out what to do tonight.

The story of this election is NOT that the pollsters got it wrong. Pollsters are window dressing in this process. The story is about the 20 million Americans who have health insurance because of the Affordable Care Act and what their fate might be as the Government will now repeal it, as they wait to see what replaces healthcare policy. The story of this election is about Federal Workers who saw the promise of a minimum wage increase go away. The story of this election is about how millions of Americans who are languishing in the Criminal Justice System and their families are returned to the shadows of our National discussion. The story of this campaign is how 57 million people, largely in rural America rose up and demanded action on Trade Deals and Immigration Security and other issues that affect their lives. It’s the story about working people who were simply fed up… it’s the story of how stoking fears and pitting people against each other makes potent political theater…

I have to say thank you to the surrogate team of the Hillary Clinton Campaign and to the dozens of staffers, volunteers and supporters who carted me all over 16 states. I want to say thank you to all of the people who listened to me speak my views as a guest in your states. I also want to thank everyone who follows me on social media and took the time to read my writing.

I simply must thank Hillary Clinton. She is the person who first captured my imagination in political life, and I think she is a brilliant and caring public servant. Thank you Hillary. On behalf of my Wife Christine, our Daughters Ali, Elizabeth & Isabella, Thank You!

Finally, please, everyone, in the coming days, take moments to reassure our immigrant friends and families that they are safe, that they are loved and that they are not alone. Of all those who will feel badly about the outcome of the election, I sense that it is these people in our community who are feeling immediately threatened.

Let us lead by example…

Prayers and Peace for All. There is always hope.