On Gandhi, civil disobedience & future of US

I’ve been tweeting. A lot. It’s a guilty pleasure full of empty intellectual calories. In the wake of the 2016 Presidential Elections, I’ve been trying to process and categorize my thoughts and feelings. Pithy retorts. Quips. Even vulgar exhortations. I’ve bunkered down in a social media foxhole filled with snarky comebacks and stealth observations. To what end? 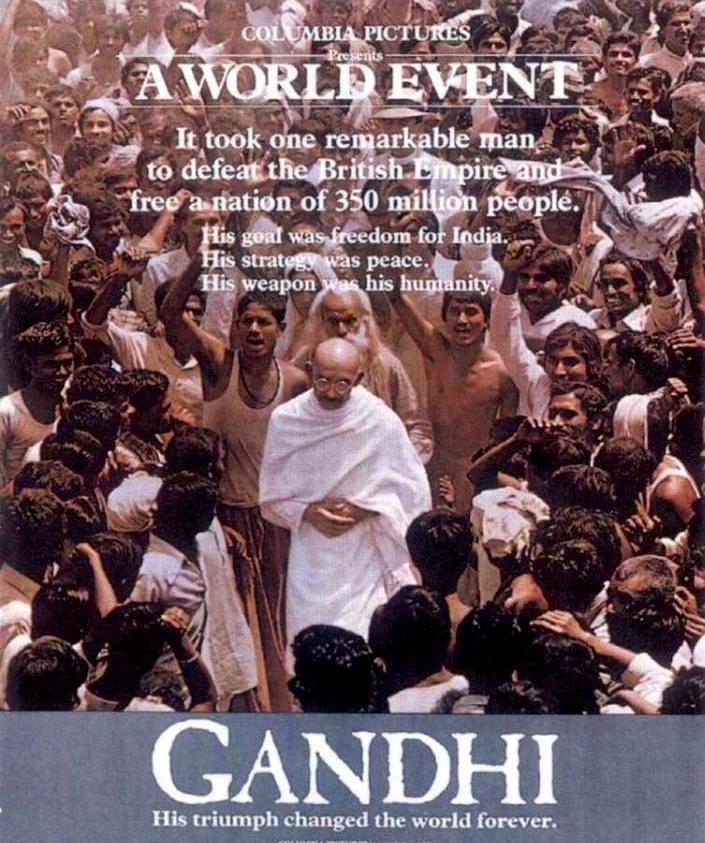 The President Elect is proving true to form. His arrogance, ignorance and gobsmacking corruption are on full display for the whole world to see. Make no mistake, they are seeing it. If you don’t feel the earth trembling beneath your feet, then you aren’t paying attention. It gives me zero pleasure to relate my observations and it may be of little value for me to share them. But, my fellow Americans, we are in a moment of genuine crisis now. The bitter calumny and falseness coming from 5th Avenue are not just shots across our Nation’s bow, they are fully armed torpedoes heading straight at civilization as we know it. America’s decency isn’t just a quaint notion and it must never be taken for granted. And yet it is. Tragically, what’s at stake isn’t merely a tone in our national discourse, which has moved from shrill and piercing to an even more sickening dull sub-earthen death moan. It’s worse. It’s not just the fabric of our social skin that tears, rather, the structural integrity of Democracy, of our economy and our relationships around the world are under assault.

In jest, I say that I like acting in post-apocalyptic settings, not living in them.

The environment, trade with nations great and small, stewardship over the welfare of our laborers, our small businesses, the healthcare and safety of so many are all in grave danger. Oligarchs and Generals. That’s who are scooting up to the table. Many folks with absolutely no experience are being put in charge of policy making and enormously large budgets. The zombified press corps and the thoroughly corrupted purveyors of news offer carefully disguised insight, hidden in barrels of goopy distraction.

It ain’t a pretty picture. I have children and I want them protected. I want your children protected too. So. What can be done? Indeed.

Gandhi is my favorite film. In the Scandinavian pre-sunrise, I’ve just marveled in it again. Such, hope. Such bravery. Such a gift. Gandhi’s life. The movie of Gandhi’s life. I’m so grateful that it’s always there for me when I need it most. The optimism. The inspiration. The contrasts. Grinding poverty and suffering that the Indian people endured and endure. The violence. Civil War. But also, The music. The scenery. The food. The trains, man, I gotta ride on the roof of one of those trains before I die. A love letter to the struggles and aspirations of the 20th century world bathed in colonial imagery and steeped in the political and social justice battles of their time on the sub-continent. Incredible.

How to apply the timeless lessens of Gandhi’s political philosophy to our situation. That is the high stakes game I’ve been considering. It doesn’t likely start with my adopting an ascetic life. Yet, when one participates in running marathons, as I have, the trappings of wealth and privilege seem secondary to the primal focus on water and the modest nutrition of the day. I just mean that one of Gandhi’s great accomplishments is over the mastery of his physical body and his ability to eschew the trappings of luxury. Indeed, the idea of letting go of “ownership” in this life would seem a perfect spiritual achievement. Alas, I really like our house and not sitting in coach if at all possible.

I’m not sure what Gandhi would look like in America today. A Jewish Socialist from Vermont? Some kid or middle age person who started with the Occupy movement, graduated to Anonymous and maybe Black Lives Matter? Jill Stein? Al Gore? Leo? An as yet unknown person who defies characterization by label?

We have a very bad habit in this country, perhaps it’s in our collective DNA. We can not help it. We must have a messenger equal to our messages. The only trouble is that the required messages are so powerful that no one person can carry them. As times demand, someone usually rises to meet the moment. Mandela, King. Mortals falter. We err. We die. And so quite often, Lady Progress takes the message, no matter how important, and anchors it to the messenger. Together, the distracted masses bury them at sea. Whoever shall rise, shall fall. When monied interests, or the powerful feel threatened, they destroy the messenger, and so too the message. What’s even scarier is that large groups of people will pummel a messenger to protect nothing.

Everyone on Planet Earth should have:
Food. Shelter. Clothing. Healthcare. Education. A Job.
Freedom. Peace and a healthy Environment.

Who shall carry this message? The odds are, you’ve already tried to kill the message in your own mind. Reread the message. And again. Was it your instinct to dismiss the totality of this message as impossible. Or worse, did you dismiss out of hand that someone, somewhere, or many someones were not worthy of these things? Why, because of Geography? Religion? Politics? Because their Governments or Leaders are stupid, unworthy, an enemy?

This is a good message. Food, Shelter, Clothing, Healthcare and a good education. Why is this improbable, unlikely, impossible? Why? War? Religion? Why? Because it’s too “idealistic?” Is it because of beauty contestants who say “World Peace” and the audiences that clap for them are morons?

Search your own mind. Have you come up with an answer as to why this message is impossible, why it’s not imminently achievable? Now answer this: Is there any evidence throughout history that proves it is indeed possible to address issues just like the one you have in mind? Remember key words and phrases like, Peace Treaty, Breakthrough, Unprecedented.

If so, if this message has been achieved at some point, on some scale, why not now? Why not now on a larger scale? Why not now?

Two quotes strike me as vital. Here at the dawn of what promises to become a nasty time in American life, I commend to your attention these two thoughts. First, a stranger, a clergyman, introduces himself to Gandhi and says generally that he’s here simply to help. He asks Gandhi if that sort of unsolicited offer surprises him. Gandhi replies, “At first I was amazed, but when you are fighting in a just cause, people seem to pop up… even when it’s dangerous.” The second quote comes as Gandhi leads the 240 mile Salt March to the Arabian Sea in protest of the British Salt Act. As tens of thousands of people stream together, Gandhi responds to a reporter, who asks, “Is it all over if they arrest you now?” With a spring of purpose in his step and bolstered by the footsteps of his countrymen, Gandhi replies, “Not if they arrest me or a thousand or ten thousand, It’s not only Generals who know how to plan Campaigns.” The reporter asks, “What if they don’t arrest you, what if they don’t react at all?” Gandhi replies, “Something for your notebook, The function of a Civil Resister is to provoke a response.”